Preview 8 out of 86  Flashcards

How is DNA transcribed to mRNA?
How is DNA transcribed to mRNA?
The DNA is unzipped for part of its length so that an mRNA molecule can be formed. This first mRNA strand is modified or edited before it leaves the nucleus. Some of the regions of the mRNA strand that do not code for a protein are then snipped out.
Hybridization:
Hybridization:
Create rover and sitter strains (homozygous).
Quantitative traits methods (3)
Quantitative traits methods (3)
1 Quantitative Traits Locus (QTL): a region of DNA that is associated with a particular phenotypic trait 2 QTL analysis: may tell us that a character is controlled by many genes of small effect or by a few genes of large effect 3 Microarray analysis reveals with of hundreds or thousands of genes are active at any moment
Explain intersexual selection.
Explain intersexual selection.
Intersexual selection: occurs when one sex is in the position of choosing individuals of the other sex as mates. Although there are exceptions, females often do the choosing while males compete among themselves to be chosen.
Explain the indicator mechanisms.
Explain the indicator mechanisms.
1 Indicator mechanisms are often called good genes models. 2 particular trait in males indicates viability. 3 An example of a good genes model is the handicap principe females prefer a male with a trait that reduces his chances of survival but announces his superior genetic quality.
Life history
Life history
An organism's life history is the sequence of events related to survival and reproduction that occur from birth through death.
Name different mating systems (4).
Name different mating systems (4).
1 Monogamy: one partner for both sexes 2 Polygyny: some males copulate with more than one female 2.1 Female defense polygyny: harem 2.2 Resource defense polygyny: territory 2.3 Lek polygyny: females prefer dominant males 3 Polyandry: some females copulate with more than one male 4 Polygynandry (promiscuity): both sexes have more than one partner
What is: operational sex ratio?
What is: operational sex ratio?
The ratio of potentially mating males to fertilizable females.
0
8
Flip
Try again

Flashcard is linked to this document: 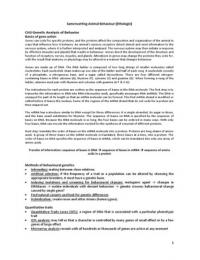