test bank Cellular and Molecular Immunology 8th Edition Abbas Test Bank.. test bank Cellular and Molecular Immunology 8th Edition Abbas Test Bank. Abbas: Cellular and Molecular Immunology, 8th Edition Activation of T Lymphocytes Test Bank Multiple Choice 1. All of the following protein-protein interactions are involved in activation of naive helper T cells by antigen-presenting cells (APCs) EXCEPT binding of: A. Peptide-MHC complexes on the APC to the TCR on the T cell B. CD4 on the T cell to nonpolymorphic regions of class II MHC molecules on the APC C. Integrins on the T cell with adhesion ligands on the APC D. B7-2 on the APC with CD28 on the T cell E. CD40L on the T cell with CD40 on the APC ANS: E. CD40L is not expressed on naive T cells and is only up-regulated subsequent to activation by an antigen-presenting cell (APC). In the naive helper T cell, the TCR binds to the MHC-peptide complex whereas the CD4 coreceptor engages a conserved region on the MHC II molecule. Integrins on the T cell interact with adhesion ligands on the APC. This region of binding between the T cell and the APC is known as the immunologic synapse and also includes costimulatory interactions, such as CD28 on the T cell binding to B7 on the APC. NURSINGTB.COM 2. Which one of the following statements about MHC-TCR interactions is NOT true? A. Antigen receptors on T cells bind to MHC molecules for only brief periods of time. B. The affinity of most TCRs for peptide-MHC complexes is similar to the affinity of antibodies for their antigens. C. Only 1% or less of the MHC molecules on any antigen-presenting cell (APC) display a peptide recognized by a particular T cell. D. T cells usually require multiple engagements with an APC before a threshold of activation is reached. E. A subthreshold number of MHC-TCR interactions can lead to T cell inactivation. ANS: B. In general, the TCR binds to peptide-MHC complexes with lower affinity than antigen-antibody interactions. This relatively low-affinity interaction occurs briefly; thus, a T cell may need multiple engagements with the antigen-presenting cell (APC) before a threshold of activation occurs. If this threshold is not reached, the T cell may enter into an inactive state known as anergy. On any given APC, less than 1% of the MHC molecules display the same peptide.

All documents for this subject (19) 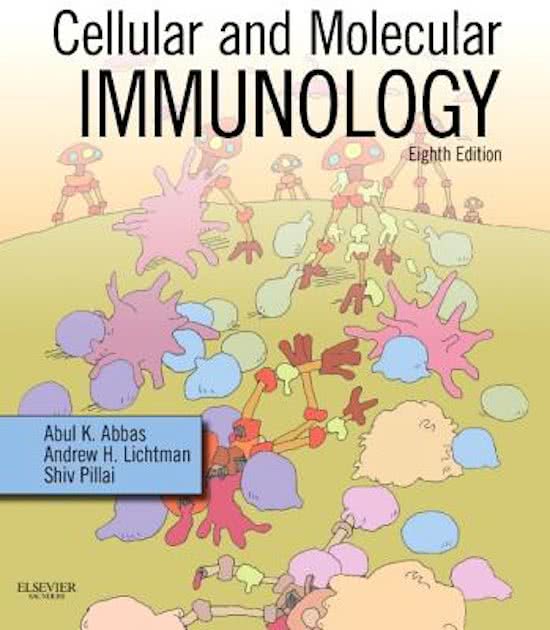 All for this textbook (3)